Why You Need A Test Environment

Some companies I’ve worked with have different forms of testing environments, including QA (Quality Assurance), IAT (Internal Acceptance Testing), and UAT (User Acceptance Testing). What they are called doesn’t matter, so long as they exist.

In a typical IT deployment, whether using Waterfall, Agile, or other development methodologies of the month, it pays to have a basic development → test → production deployment path.

This environment can be a general playground, building things, writing code, installing weird and wonderful third-party plugins, getting the job done as far as producing new things is concerned.

In the development environment (which might be a shared machine, or a bunch of sticker-encrusted laptops used by developers), there should be something called Source Control.

Entire books have been written about source control, but the premise is that development environment is a cesspit of trouble, so any code that is written and compiled (without breaking the build), should be checked into source control as soon as possible.

1) Other developers can access the new code without having to plug in a USB drive and risk malware infection on Steve’s laptop (sorry, Steve).

2) If Steve’s laptop is stolen, or he spills coffee on the keyboard, or it gets infected by malware because he doesn’t keep the operating system up to date, the source code is checked in safely somewhere else, and the team doesn’t lose what could amount to days of productivity.

3) The third purpose is for something called Continuous Integration, which is a fancy way of saying that as soon as code is checked into source control, an automated testing process is able to compile the code, deploy it somewhere, and run a battery of tests against it without human intervention. CI is much faster than manual testing.

It’s imperative to keep in mind that all software contains bugs. We may not have a Steve in our company, but developers always make assumptions—they have to; it’s part of the job—so little things can escalate into big things if the software is not used as intended.

The test environment should be set up exactly like production, down to hardware and operating system configuration. The only differences should be application configuration that might point to a test vs. a production database server, for instance.

Why is it so important to make sure that test and production look and behave the same?

In the case of SQL Server for example, a simple thing like data distribution in a table, along with the amount of RAM or CPU cores, will cause a specific query plan to be selected. If the same query is deployed to production with a different underlying hardware configuration or data distribution, a worse query plan might be selected by the query optimizer, and the developers are going to have to work nights and weekends to fix it. 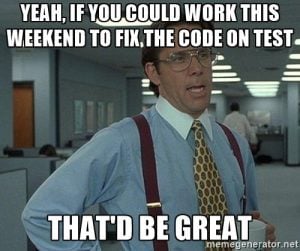 Whose fault is it, though? In this particular case, it’s the fault of whoever set up the test environment, because it doesn’t mirror production.

When I mentioned the different types of test environments above, this is what they are for:

Usually, there’s a bit of a cycle in the process here, where if something fails in test, it has to be fixed in development and redeployed, until it passes muster.

Once code has been signed off by the end users and QA, it can be deployed into production. This can be done in many ways, and unfortunately one of those ways is that Steve has a USB drive containing files that he transferred from his coffee-and-malware-infested laptop.

Deployment to production should be the exact same process as deployment to test. Why? Because if it is not, then assumptions are being made and things can go wrong.

Remember source control? The best deployments are automated deployments. They are scripted, which makes them repeatable and therefore predictable. An automated process should be able to grab code from source control, compile it, and deploy it, the same way every time.

Most companies will have a maintenance window during which deployments can take place. These are usually outside of working hours and on a weekend, but in my experience, weekends are a terrible time to deploy new code, so I prefer it to happen on a Wednesday night. That way, Steve is most likely in the office on Thursday morning to fix his bad code.

Source control should be the single version of the truth. If a developer is deploying from a thumb drive, stop doing that right now. There are free and cheap solutions available that can automate deployments for you that require only a small amount of effort to achieve repeatable success.

Source Control: Get it now. If you want to use an online provider (which I recommend), check out GitHub (mostly free), Visual Studio Team Services (free for up to five developers), or BitBucket (mostly free). There are probably hundreds more.

Continuous Integration: Check it out. Visual Studio Team Services has it built in, even with the free version. Remember, the whole point of this is automated builds and repeatable results.

If you would like to discuss this with me further, you can find me on Twitter at @bornsql.

Tags:DevelopmentprodProductionsoftware developmenttestTesting
previousHow to write a DELETE query
nextWhere To From Fundamentals?