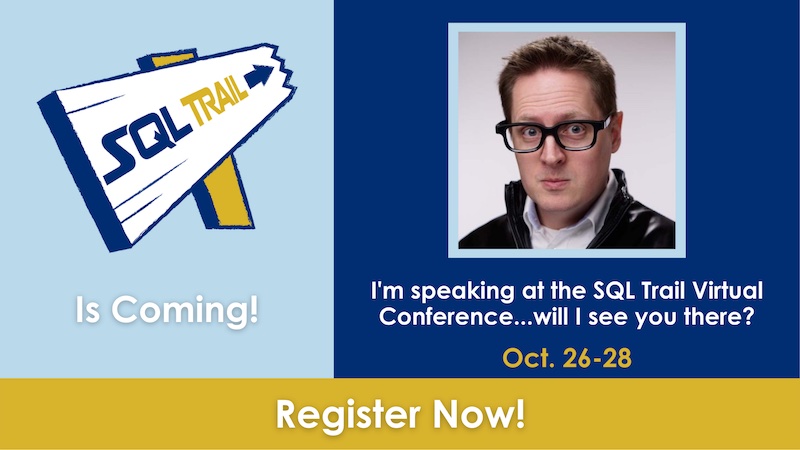 I’ve had the privilege of presenting all over the world about temporal tables in SQL Server including the United Kingdom, Canada, and the United States. The theme of the session has always been Back to the Future, which is the greatest time travel movie ever, but I haven’t changed the talk much since I debuted it.

At the first SQL Trail in 2017 where I was the first speaker of the conference (it was known as the Compañero Conference back then and I might have played a small role in rebranding it), Carlos was quite clear about his requirements: if you want to speak at his conference, your content has to be fresh. It can be based on existing content, but it needs to be special. PASS Summit had a similar requirement, and I can dig it. Trotting out the same talk each time is lazy.

So, I’ll be presenting at SQL Trail for the second time in its five-year history, and while I’ll be talking about temporal tables again, I promise I’ve freshened it up a little. Not just because I had to, but because I wanted to include some information about system-versioned ledger tables as well. You’ll have noticed I’ve written a few posts about that in recent weeks.

What I also like about the format for SQL Trail is the breakout rooms, which are shown as virtual tables. The virtual conference software seems a little friendlier than your traditional Zoom or Teams experience, which makes for a friendlier atmosphere.

Please join me (and other fine speakers) at the virtual SQL Trail 2021 conference from October 26th to 28th, 2021. You can register on the site at sqltrail.com. It’s going to be a good one.